1. The technologies evolution from the first industrial revolution to the present.

Historically, the industrial society was preceded by the agricultural society which began to disappear at the end of the eighteenth century.

Materials processing technologies have evolved disruptively since their inception until now, and four major industrial revolutions can be defined (referred to in the literature as Industry 1 to Industry 4)[1]. The first industrial revolution, which began in the last decades of the eighteenth century, is characterized by the introduction of mechanical production equipment powered by the force of water or steam. The second industrial revolution began at the end of the 19th century. Specific to this revolution is the use of electric drive of production equipment and the realization of mass production based on the division of labor. The third industrial revolution began in the 8th decade of the twentieth century with the advent of Logic Programmable Controllers (PLCs). Its basic feature is the use of electronic systems and information technology in production automation. Today, we are in the beginning of the fourth industrial revolution (Industry 4.0), characterized by the use of cyber-physical systems in production processes. The Industry 4.0 revolution stipulates that the product to be manufactured is able to interact with the manufacturing equipment (machines and robots) and transmit to them the requirements for the next phase of the processing process, thus achieving connectivity between the process elements. Thus, an intelligent production system capable of communicating and making optimal decisions autonomously is achieved. A graphic presentation of those four industrial revolutions[2] is represented in Figure 1.

Fig. 1. The evolution of technologies from the first to the fourth industrial revolution [2].

Looking to the history of technologies, from the point of view of adaptation to consumer requirements[3], we can periodize it in the following four stages (Fig. 2).

– The period before the first industrial revolution (that of artisanal production) is characterized by the fact that each product was designed and made for a certain customer (footwear, clothes, harnesses for horses, etc.).

– The industrial revolution of the eighteenth and nineteenth centuries led to an increase of productivity and production volume by product variants, which led, at the beginning of the twentieth century, to move to another paradigm, that of production table (introduced by Ford in the manufacture of the Ford T car model). At this stage a limited number of products are manufactured, these being made in a very large (mass) number, assuming that there will be enough buyers for them. The year 1955 is considered to be characteristic for mass production, being the year with the highest production volume for a certain product variant. Starting with this turning year, the variety of products increases, and the number of products on one variant begins to decrease.

– The year 1980 is the year of moving to a new stage, that of mass customization, in which the customer selects the desired product from a list of options before making it (a classic example is the choice of car configuration by customer based on a list of variants and then launch it into production).

– The fourth technological stage is that of customized production that begins in the first decade of the 21st century. During this period, the product options are chosen by the customer, purchased from the manufacturer and then made with advanced processing systems. An essential role in the technological leap in technological innovations, which have been applied on an industrial scale: rapid prototyping technologies, more recently called Additive Manufacturing technologies, cloud manufacturing (term adopted by similarity to the term cloud computing), augmented reality, simulation stochastic etc.

Fig. 2. The cyclical evolution of manufacturing from the first to the fourth industrial revolution.

The Industry 4.0 initiative was introduced by the German government in 2011 at the Hanover trade fair. Soon, this initiative was followed by other states under different names: Factory of the Future (France and Italy), Catapult (UK), “Smart Manufacturing” in the US, respectively “Made in China – 2025″ in China or ” Innovation 2025 »in Japan. The term became extremely popular with the initiative of the World Economic Forum to organize a debate on this topic at a meeting in Davoz, organized in January 2016 by Klaus Schwab, the founder and coordinator of this organization. Industry 4.0 is characterized by the automation, digitization and interconnection of all components in production processes.

1. AI and Machine Learning. Through AI, computers can understand human language, recognize objects, sounds, colors, and other external stimuli, and learn, plan, and solve problems. Gartner defines the smart digital network as the interaction between people, devices, content and services. Machine Learning (ML) is a way to get AI; ML describes the process by which a computer system learns from the data it accesses without being programmed for this task. The most well-known applications of ML are: estimating the exchange rate of shares and decisions on transactions and investments; diagnostic in medicine; analysis of data generated by vehicles in dynamics, identifying patterns of behavior to streamline traffic; identifying consumer preferences and personalizing advertisements and recommendations.

3. Industrial Internet of Things (IIOT). In the industrial field, IoT integrates intelligent machines, advanced data and people into a high-performance and fluent ecosystem.

4. Virtual reality / VR. VR technology emulates the experience of interacting with the environment, bringing it closer to known reality. VV allows us to leave the real environment and become an integral part of making alternative reality, to interact with the elements that compose it; technology creates a reality version which the brain can consider is real, although it doesn’t really exist.

5. Augmented Reality (AR). AR technology resembles VR but does not have the same captive effect, the user does not lose contact with the environment. AR builds an alternative reality starting from the real environment that it enriches with computer-generated elements.

6. Mixed reality (MR) or hybrid is a newer technology than AR and VR, which creates predominantly virtual spaces in which real-world objects and people integrate dynamically with projected worlds, thus producing new environments and realities, where digital and physical objects coexist and interact.

7. Industrial robots and co-robots or cobots (collaborative robots created according to game theory) have AI, autonomous abilities of cognition, decision, learning and adaptation. They are equipped with sensors, technologies and intelligent systems that connect them to other ecosystems. Due to the sensors and functions of ML, the cobots are aware of the presence of people, the degree of proximity, the place and the context in which they are.

The smart factory is at the heart of Industry 4.0. The aim is to create an autonomous production where people, machines, plants and products communicate independently one with another. The so-called cyber-physical systems make production more flexible and efficient, changing the usual structure of a process chain (5), which ultimately leads to the implementation of individual customer desires at costs that were previously possible only in mass production.

For an easier understanding of the difference between process chain structures in a classical manufacturing system and one specific to Industry 4.0, these have been shown suggestively in Figs. 4 [5]. In the classical system, the production process takes place in a well-defined manufacturing flow, between independent working cells, as seen in Figs. 4.a. In the new Industry 4.0 concept there is a flow of both products and data, integrated with each other (Fig.4.b).

Some specific features of the new manufacturing concept are:

– an integrated communication throughout the entire work cycle (1);

– a high degree of automation, which will lead to the replacement of operators performing low-skilled work with robots (2);

– increasing the number of highly qualified people for the monitoring and management of manufacturing luxury (2);

One of the characteristics of Industry 4.0 is the focus on technologically complex products made by small and creative teams of experts with transdisciplinary education. 3D printers make additive production possible, which is much more economically efficient than subtractive.

Additive production involves the construction of three-dimensional objects of any shape by adding, level by level, layers of material (plastic, metal, etc.). In classical industrial production, objects are made in a subtractive way, in the sense that they start from a larger amount of material from which the desired object is extracted. Example: to make a wooden figurine by industrial methods, we start from a larger piece of wood from which the figurine is extracted. In the case of additive production, the same figurine can be made by adding different layers of extruded material (melted and molded) by a 3D printer.

The advantages of additive production are multiple, ranging from lower costs (reduced material and labor consumption) to the ability to quickly make objects needed to maintain complex installations. For example, in the event of a defective part of a vehicle, the replacement of the defective part can be done on the spot by 3D printing of a predefined model. Additive production benefits both industrial and military applications where certain necessary components can be produced on the spot.

Makerspaces are transdisciplinary spaces where technologically complex objects can be created creatively and collaboratively using robots, 3D printers and drones. They are a kind of laboratories of the future, in which experts with transdisciplinary education can operate or build physical-cybernetic systems. It must be highlighted that one of the main characteristics of makerspaces is transdisciplinarity, which involves the simultaneous management of the dynamics of several levels of the surrounding world. Makerspaces are essential for the Industry 4.0 implementation, because they represent the spaces where new products and services based on advanced technologies and materials are made. The number of makerspaces is currently low, but as the number of robots increases, they will replace the classic industrial assembly lines. Makespaces will be in the future the main space for the production of goods and services with economic value. 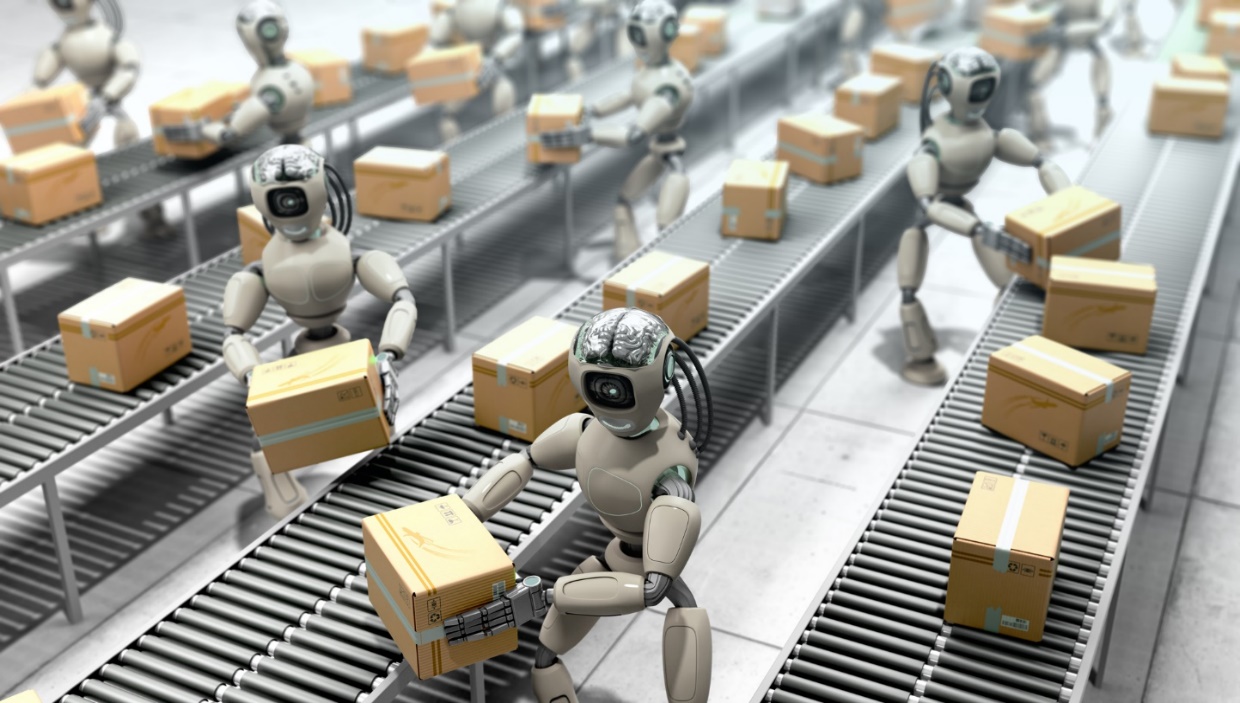 Securing the makeerspaces from a cyberspace perspective is vital for the success of the communities wich are building their competitive advantage around advanced technologies. A potential attacker must not physically destroy makerspaces to cause damage. It is enough to alter the software systems or to extract, imperceptibly, the data that represent the results of the creative work of the experts from the attacked makerspaces. With no research and development costs, the attacker will be able to market lower-cost products made in its makerspaces.

Educational makerspaces are especially important because children must learn to think transdisciplinary from an early age. To be employable in the future society, today’s children must learn to be technologically creative, to think transdisciplinary, to program computers, to have critical skills, to master ways of expressing complex ideas through digital storytelling.

In conclusion, we can say that cyber security and artificial intelligence are key areas for those who want to be among the winners of Industry 4.0. Securing physical and cyber systems, which will frequently operate in makerspaces, is a key issue in a world where data and software are becoming the main economic values.